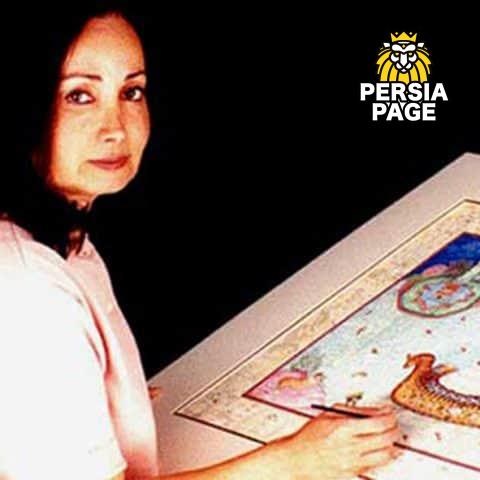 From the third century on, Persian Miniature has flourished in Iran and its neighboring countries. And even though the original miniature style has undergone dramatic changes, the name and the style of this particular art are recognizable by art historians, museum curators, and connoisseurs.

The first Persian Miniaturist was Mani, the third century Prophet in Persia. Mani’s religion combined Christianity and Zoroastrianism and used his paintings to communicate with people through his book. As a result, he became a book illustrator.

His artwork had to be small enough to fit in his books, therefore he had to produce miniature work. This is where the name for this particular style of painting came from, even though the work is no longer in miniature size. However, neither Mani’s religion nor his holy book was popular among the ruling class, and as a result, he was put to death by the Sassanid Dynasty.

Yet Mani’s followers took his holy book, Arjang, and fled to Central Asia spreading the appreciation for his beautiful, colorful manuscripts. Soon kings and other men of power started collecting Mani’s work of art as a form of treasure. And thus, Persian Miniature gradually became well known and appealing to people the world over.

Since Persians are sophisticated, poetic, romantic, and nationalistic people, all these characteristics are visible in their art, especially in Persian Miniature paintings. It is no wonder that this art decorates many museums around the world.

Badri Borghei is a well known Persian Miniature painter and artist. She was born in Tehran, Iran on April 24, 1941. She began her training at the age of 12 when she attended Petgar Art School and Kamal-al-Mulk Fine Arts Institute. She then continued her artistic education at National Art Academy in Washinton, D. C., and Otis Parson’s Art Institute in Los Angeles. She was drawn to the ancient form of Persian Miniature paintings in 1960 and thereafter decided to dedicate herself to this type of artwork. Her medium is watercolor, and the technique is pointillism using only very fine sable brushes to enhance the detail in her work.

In 1997 Borghei received a proclamation from Los Angeles Mayor Richard Riordan when she was recognized by the YWCA of Greater Los Angeles as being an “Incredible Woman Making History.” In 2005 Borghei published a book named Persian Miniature Paintings A Window into the Infinite Garden of a Traditional Culture.

This publication consists of a collection of her cultural, traditional, and historical artwork. Borghei has had many art exhibitions in the United States including Texas University in Austin, Arizona University in Phoenix, UCLA, UC Irvine, Bowers Museum in Santa Ana, Hilton Hotel in Beverly Hills and Woodland Hills, Foundation for Iranian Studies in Maryland, Contemporary Art Gallery in Los Angeles, Pacific Asia Museum in Pasadena, Municipal Art Gallery in West Los Angeles (presented by the Department of Cultural Affairs), and private events.

Borghei has taught Persian Miniature technique at UCLA Extension, Santa Monica College, Learning Tree University, and privately. In addition, Borghei’s artwork has been the topic of discussion by professor Michael Hillmann at Texas University in Austin.