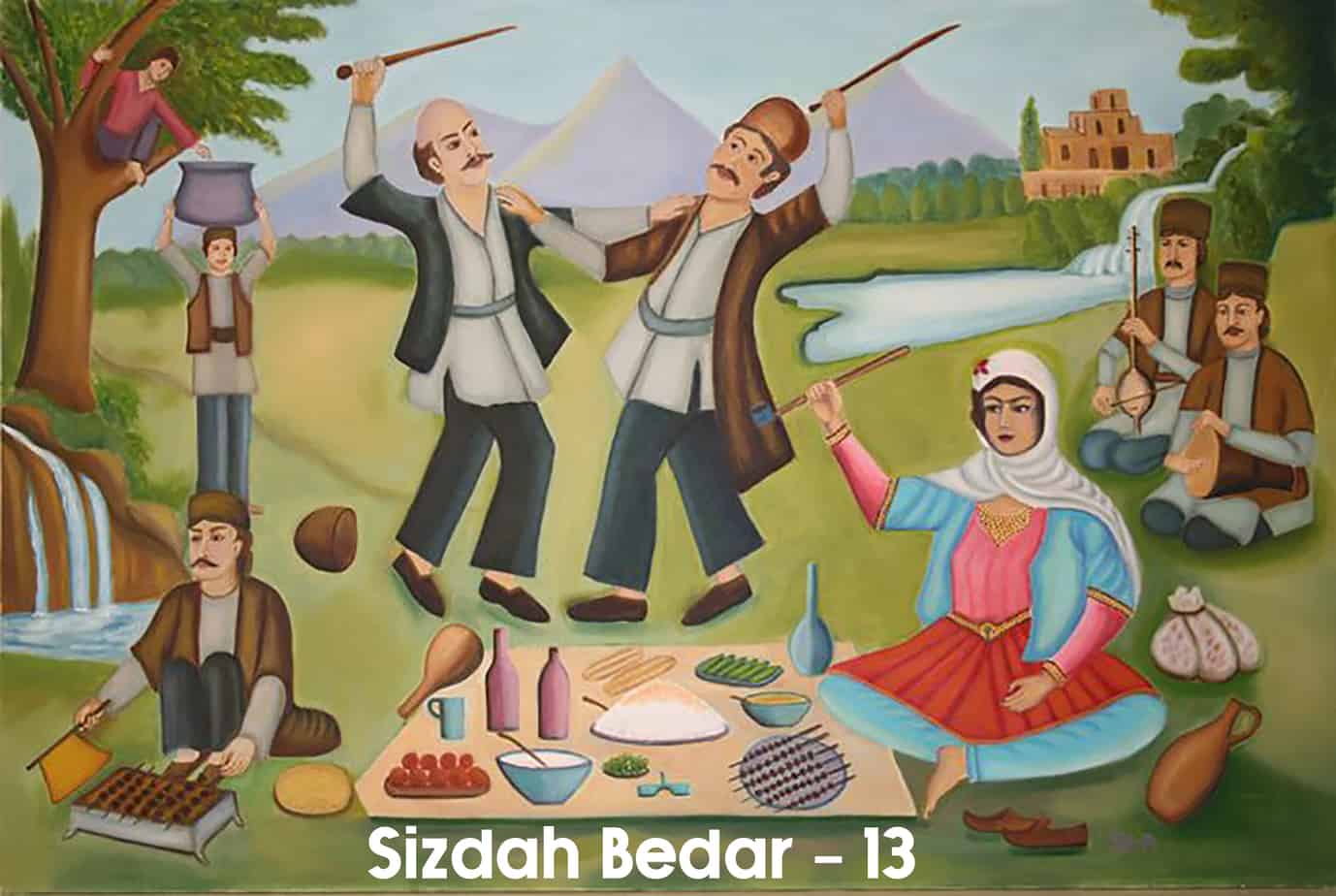 Iranians have a tradition of spending the day outdoors on the 13th day of Iranian month Farvardin, which normally falls on April 03. ‘Sizdah’ means thirteen, and ‘bear’, means to get rid of, i.e ‘getting rid of thirteen’. From ancient times, Iranians have cherished this day, although it is also the day that marks the end of the Norouz holidays, The first 12 days of the year are very important since they symbolize order in the world and in the lives of people. The 13th day marks the beginning of the return to normal daily life.

It is customary on this day, for families to pack a picnic and go to a park or the countryside. It is believed that joy and laughter clean the mind of all evil thoughts, and a picnic is usually a festive, happy event.

‘Sizdah Bedar’ is also believed to be a special day to yearn for rain. It is also a day for competitive games. A ritual performed at the end of the picnic day is to throw ‘Sabzeh’ (sprouts) into a river. The ‘Sabzeh’ is supposed to have collected all the sickness, pain, and ill fate which were in hiding for the family throughout the coming year! Touching someone else’ ‘Sabzeh’ on this 13th day or bringing it home is, therefore, considered a bad omen, and may invite other peoples’ pains and hardships to oneself.

Every year, Iranians go outdoors for picnics, in the parks or the countryside on the 13th day of Persian New Year, called Nowruz, as part of rituals to mark the festival of nature. They also take the opportunity to preserve the environment. The day, which is celebrated on the 13th day of the first Persian calendar month of Farvardin, usually falls on April 1 but in leap years, it coincides with April 2.

Sizdah Bedar is the Persian festival of nature and is celebrated on the 13th day of the new year in the month of Farvardin (corresponding to April 3), the last day of the Norooz period. This is the last phase of the New Year’s celebrations which begins with the fire festival of Chaharshanbeh Soori of the Persian New Year. As Chaharshanbeh Soori is part of the traditions to welcome Norooz, Sizdah Bedar is one to escort the celebrations away. The first 12 days of the year hold special importance as they symbolize order in the world and in the lives of people. The 13th day marks the beginning of the return to ordinary daily life and inaugurates a happy new year. The custom is to spend the day outdoors, in the parks or in the countryside.

The researcher explains the origin of ‘Sizdah Bedar’

Shahr-e Kord, Charmahal Bakhtiari, April 2, IRNA – Head of the Iranology Foundation of the Charmahal Bakhtiari province, researcher and Iranologist, Abbas Qanbari Adivi said here Monday that the ceremonies observed on the 13th day of the New Iranian Year (started March 21), called Sizdah Bedar, date back to old days. He told IRNA that the New Iranian Year (Norouz) has been celebrated by the people of Iran in various periods as the festival of creation and the starting point of being and birth. “The 13th day of Farvardin (the first solar month in the Iranian calendar) is the last day of New Year holidays,” he added. Qanbari Adivi said that given 12 is considered by Iranians as a sacred number, it is believed that the material world lasts for 12,000 years. (Sizdah Bedar 2022)

He noted in the old days people believed that during the New Year holidays, ghosts come back and live with people and that the 12th day of Farvardin is the end of the world. “The 13th day of Farvardin was considered as the beginning of heavenly life. This day is celebrated to prevent the collapse of the world and ensure its durability,” he added.

Why Do I Need An Attorney for My Truck Accident Claim?